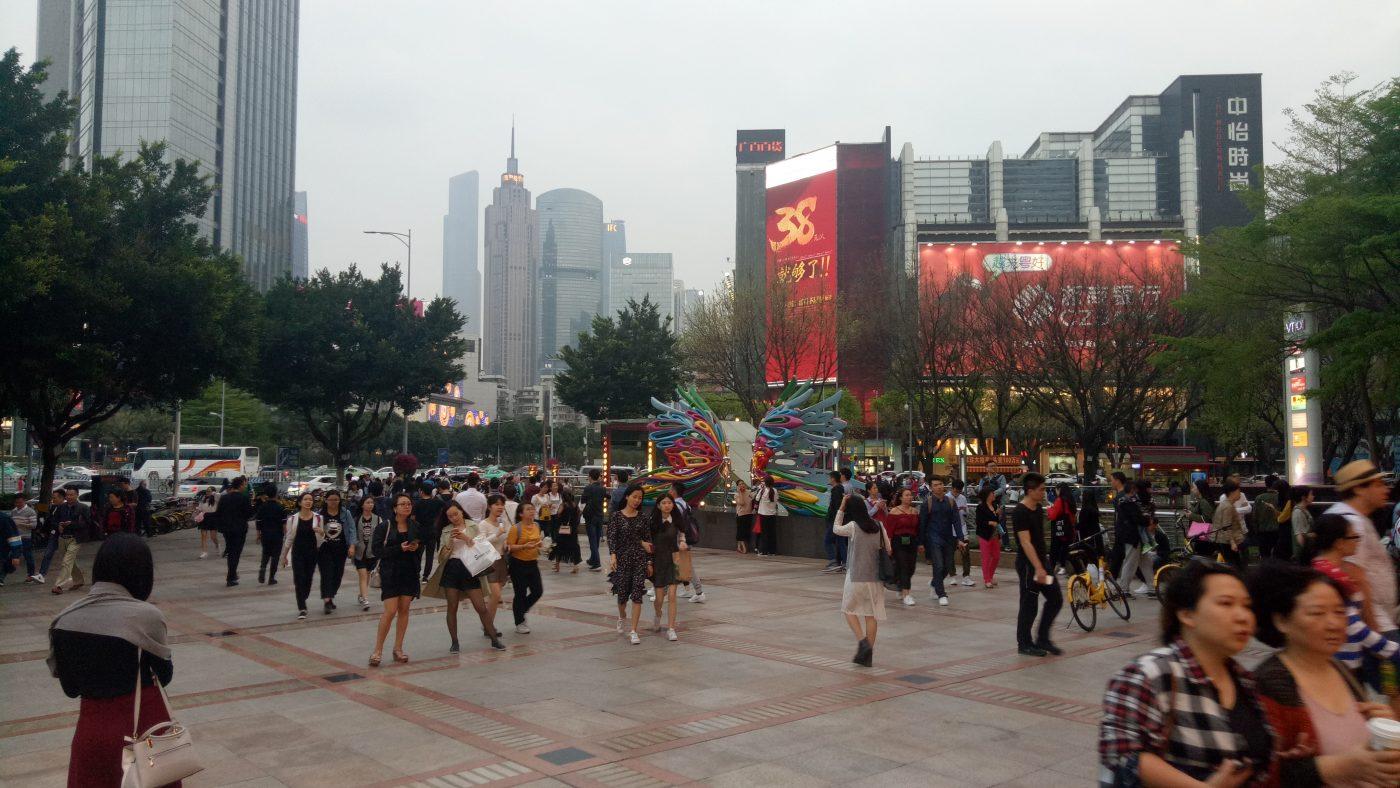 In China, Guangzhou, Tiyuxilu (体育西路), I arrived to World International English 10 minutes before my 3 pm class.

My teaching assistant said hello to me.  She was really shy.

Bringing My Australian Passport To Work

The British Head English teacher soon hustled to my desk.

I mentioned to him, “Before I go to class, I brought my passport.”

I foraged through my bag, and unveiled my Australian passport.

I prepared the class handouts for the first English class with three Chinese students, and within 5 minutes I was ready for a stress- free spoken English class.

The male Chinese student was a skinny, tall, lanky boy with big lips that swam around when he talked.

The female Chinese student on my left looked somewhat pretty.

The tall, shy, fair-skinned and cute female Chinese student on my right did not understand English too well.

I introduced myself to the English students in a comical way, as I usually do.

I then told the class I am an English teacher from Australia.

I shared some basic facts about myself before I sat down. 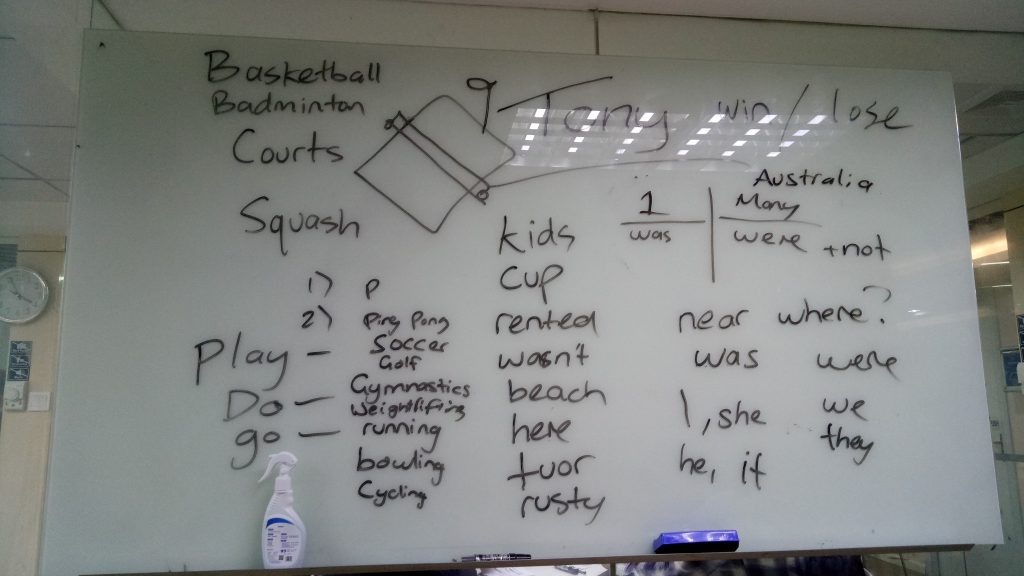 With all the niceties out of the way in the English class, I asked everyone, “How is your day?  How is everything?”

Throughout the entire English class, the Chinese English student seated on my right struggled with spoken English.

I asked, “Today, where were you? What did you do?”

The female English student looked blankly back at me, thinking, “What did he say,” looking at her paperwork, using her translator, trying to think of a reply.  That was interesting.

When I saw her use her translator, I knew her level.  So, I had to teach English more slowly in front of that English student.

We moved to read from the English conversational dialogue.

The conversational dialogue English story was fairly basic.  I listened to the English students read out their parts.

I would ask my English students as a group to repeat the English words at least three times before I moved on to the next English word.

The English words, “rented, beach, tour, rusty,” were words that they could not pronounce properly.

I had to help my English students with their English pronunciation, especially with the English word “tour”.

The One Whiteboard Rule

In the English classes my rule of thumb has become to not write more information than I would need one white board for. When the white board is full, I start writing around the white board.  I don’t try to rub anything off.

My key to having a good class is to write one white-board full of information.  That should be enough for one class lesson.

Then I can take a photo of it and take it back home with me later on.

But I am finding that I have to rub some information off here and there.  So, in the future I may have to write smaller text.

I did not have too much time to answer questions before we came to the second part of the English handout, “new words”.

I asked, “Has everyone studied these words at home before they came here?”

I said, “Let’s teach you these new words.”

I then went around the English class and asked, “What do you think this English word means?  Can you give me one example of this word?”

I was looking at the time.  It was already 7:25 pm.  So, we moved onto activity three fairly quickly.

I had done this activity with a previous English class.

I asked, “Look at all these pictures of sports in your book.  As a class, we are going to try to put the right English verb word in.  You can either ‘play’, ‘go’ or ‘do’ one of these sports.”

Then we began the class exercise.

I had written three words, “play, go, do” on the board, underlined each English word, drew boxes around them, and began to write the correct answers under each box.

I asked the class as a group, “Play golf, or go golfing?”

I got the English class students to go through each exercise question, asking, “Which one do you think goes there?”

Each student would give their opinion.

The very shy girl that had no clue about anything received my attention, as I would ask her, “Are you sure it is that one?”

I asked them to name one activity for each English verb word.  “Play golf, go bowling, do athletics.”

Then I asked, “Do you know what the difference is?”

I answered, “Golf, is a game that you do.  You play golf.  To go running is where you physically have to go from one place, travel to another place, and you are doing the motions of travelling.  So, when you go bowling, you are swinging your hand in an arc and pushing the ball.  You are moving in that game, so you are actually going bowling.”

At some times, the male English student was interested in the conversations.  At other times, he blankly looked at me, and looked a bit bored with the class.  Through these questions however, I found out that he likes basketball.

The English class lesson was over, but we had time to spare, so I started to ask the English students questions.

I drew a picture of courts, and described, “These are basketball courts, or you can play badminton on badminton courts.”

Using Comparisons In The English Language

One English student was confused about the English word “courts” so I explained that.

Then we began to talk about “win” and “lose” and the difference between those two English words.

I asked, “Can you give me an example of win and lose?”

Then we came to English grammar focus.  In this English lesson, the grammar focus was between the word “was” and “wasn’t” with the negative tense of “was not”.

I had to teach the English students, “What is the difference between those two words?  Was is used to reference one person, or yourself.  Were is to talk about more than one person.”

After we had gone through that English grammar focus, the Chinese girl on my right still remained confused.

I said, “Let’s go through the activity, and when you are finished, we can check it.”

In those final five minutes we had more casual conversation in class.  One of the Chinese girls had already finished her homework, so I checked it for her.

I casually asked her, “What are you doing after class?”

I found out that most of the kids in class were doing three classes per day.  They come to World International English and choose three to four different English classes to learn English.  I believe their effort is commendable.

Then I checked the male English student’s homework.  His English homework had two mistakes, so I corrected his mistakes and explained them to him.

Then I moved to the other Chinese girl.  I was very surprised that her work was actually perfect.  She didn’t make any mistakes when she was writing out her English, despite her spoken English being very poor.

That was pretty much the end of the English class.

The class took 55 minutes.  I thanked everyone for coming to the English class, saying, “I hope to see you all again.”

During the end of my first class, the Head English teacher came in, saying, “Take this to your next English class. Don’t forget to flash your QR code.”

I asked, “What is that for, for feedback?”

The Head English teacher answered, “Yeah, if the students after class want to give feedback, they can scan the QR code.”

Now I have a business card around my neck. 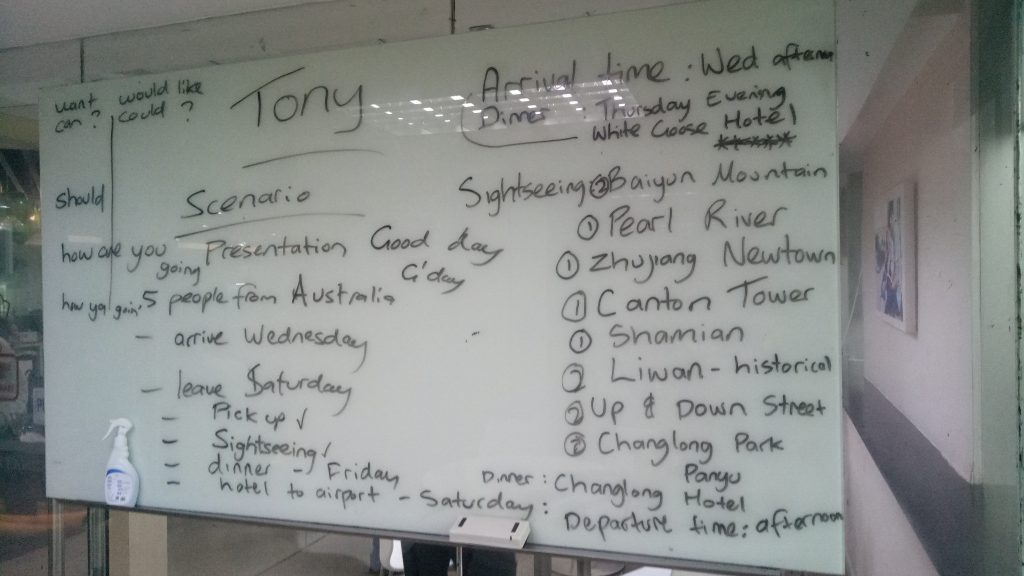 The class activity we did as a group was to organize a mock holiday for our boss.

The mock scenario was, “Five people plan to come to Colorado on a holiday.  Discuss the itinerary with your boss.  Provide a detailed itinerary of their planned travel overseas.  Include the flight bookings, where they will stay while in America, and the destinations they will visit.”

The mock scenario had the class discuss taking an American delegation to China, where on the first day in China the delegation needs to stay in a hotel.

The English students talked amongst themselves to pick a suitable hotel in China.

The English students then discussed the need for the delegation to go sightseeing for two days.

Ultimately, the American delegation had to be escorted back to the airport, so there was a separated discussion on those logistics.

As the English students discussed these scenarios, I asked, “Where is there a nice restaurant to take people?”

From there, I steered the English students into a discussion about, “What kind of area can we take the American delegation to?”

One English student said, “Let’s take them to Panyu (番禺).”

Then, one of the Chinese girls in class innocuously mentioned, “Oh, that area has a lot of foreigners (外国人),” and proceeded to belatedly giggle to herself.

I wondered, “Why are you giggling about foreigners?  You are in an English class to learn English?”

I brushed that comment off as nothing, and then did not focus on that English student for a few seconds.  It got awkward having to accidentally listen to a Chinese person discuss the taboo “foreigners” subject as if I was not there.

I couldn’t understand what the little giggle about foreigners meant, and why is it funny that the area she mentioned has a lot of foreigners?  Did she go there and try to make friends with them, or is she averse to foreigners?  I didn’t get enough time to ask her that question.

I did not grasp in what context she is talking about me and other foreigners?  Is the context ridicule, or some fun way?

Anyway, she is learning English.

The time was 6 pm when I finished my 3 English classes.

I thought having three back-to-back classes was going to be more stressful than that, but I managed it well.

55 minutes in a structured English class is not really that long.

I think the key to success was in being able to manage those 55 minutes of time, and keep everything organized and on schedule.  If you can do that, your time will pass really quickly.

Signing Off My Teaching Hours

When I finished work in World International English at 6:30 pm, I gave my teaching hours timesheet to reception, and signed off on the hours I taught English.

Dressed in a black skirt, long black stockings, and a white button-up blouse, my teaching assistant then shyly came over.

She said in a very shy, introverted voice, “Tony, are you going to be available Monday, Tuesday, Wednesday and Thursday?”

I said, “I should be available for those four days.”

I looked at her and ushered to the chair next to me in the teaching room, “Just sit down.  You can just sit down.”

She replied, “I am very busy.”

Then she went and did her work.

She is a very cute, shy girl.  We have rapport now because we have to work together. 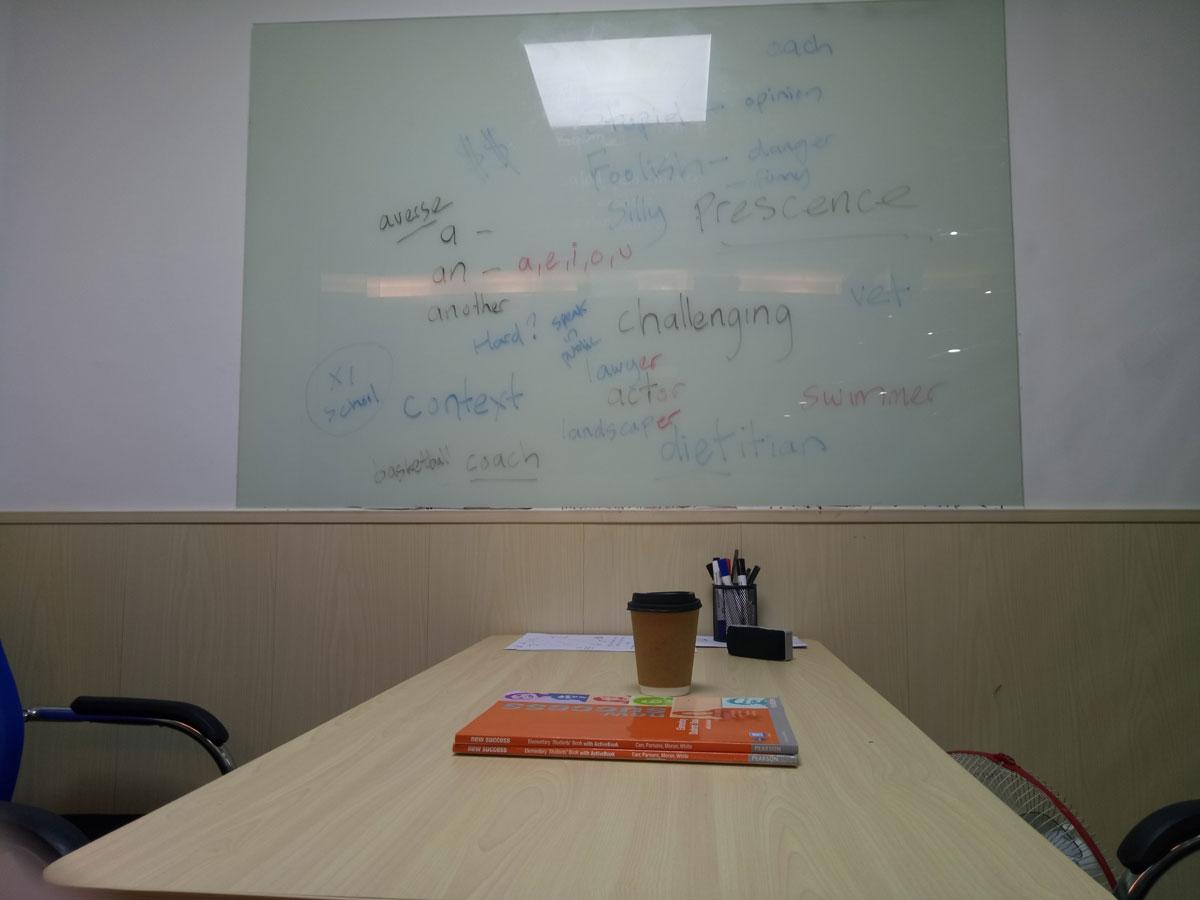 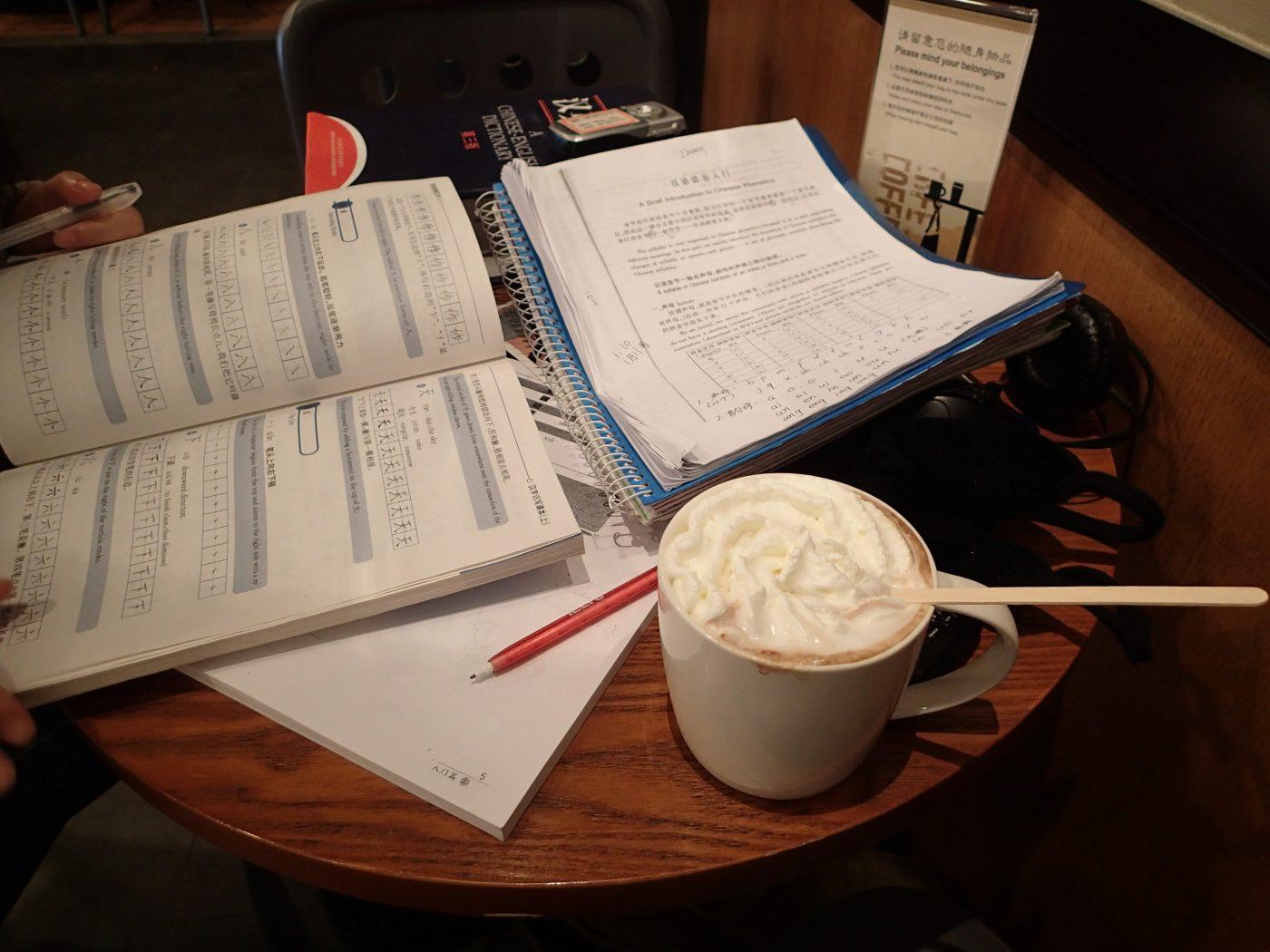 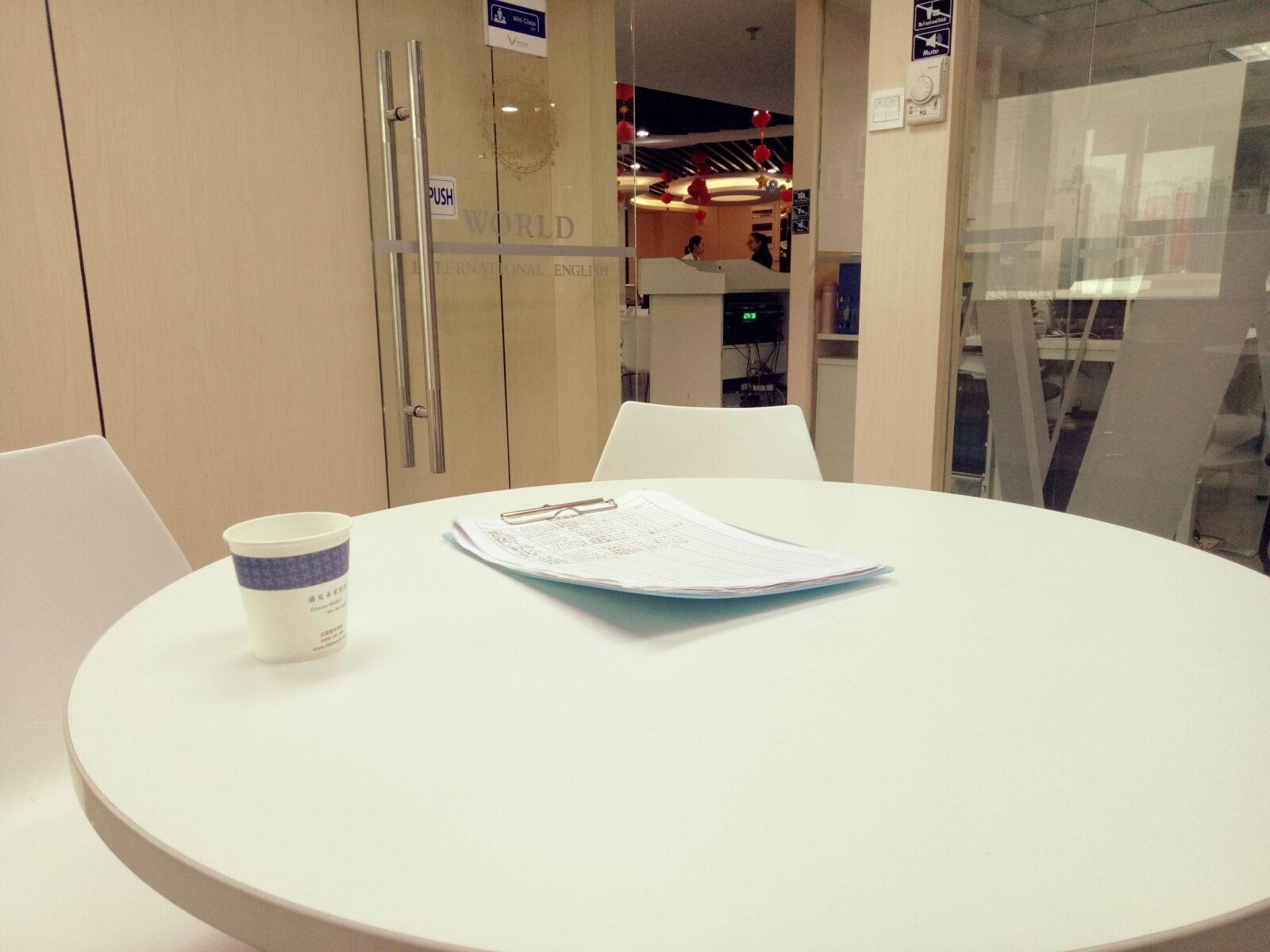 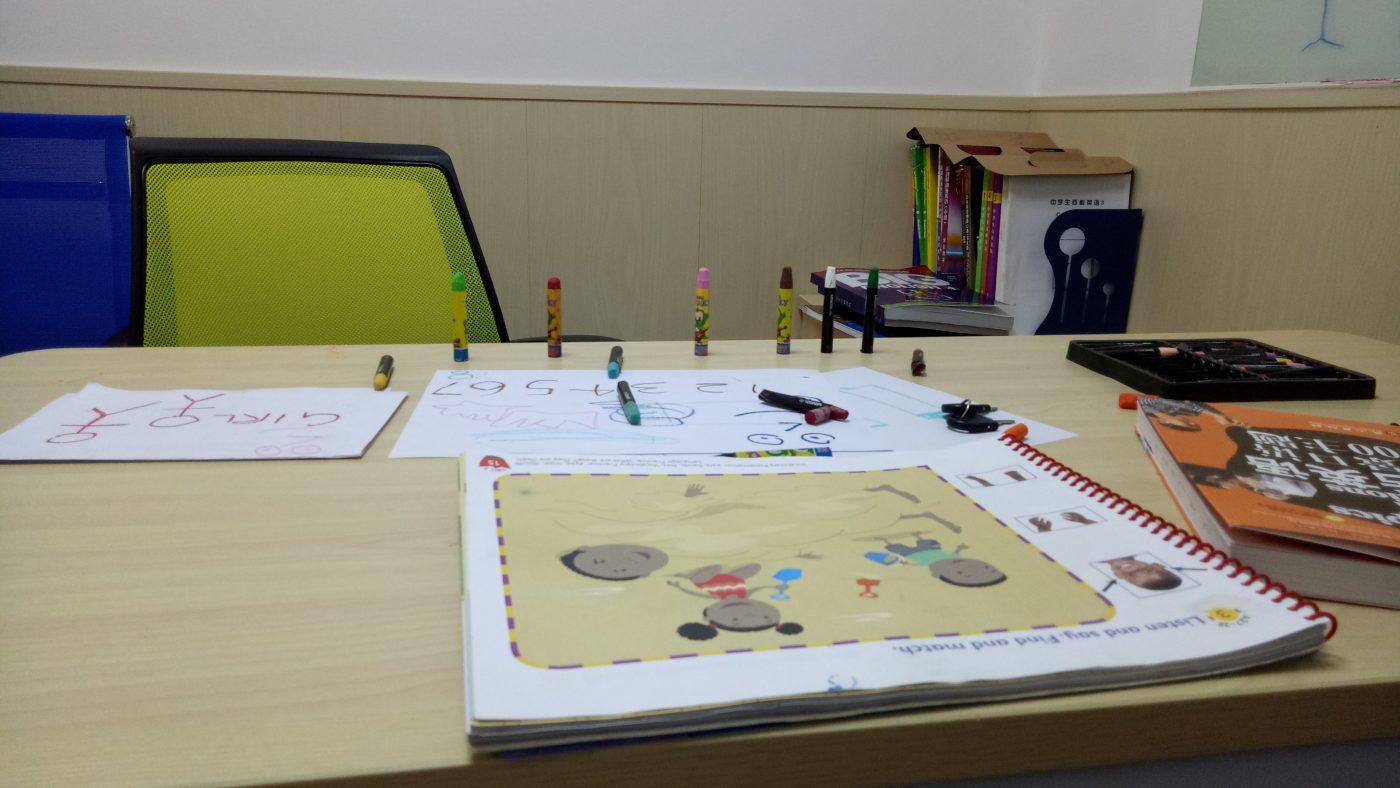 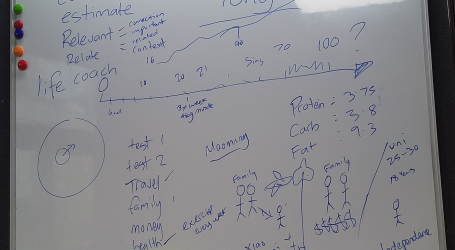 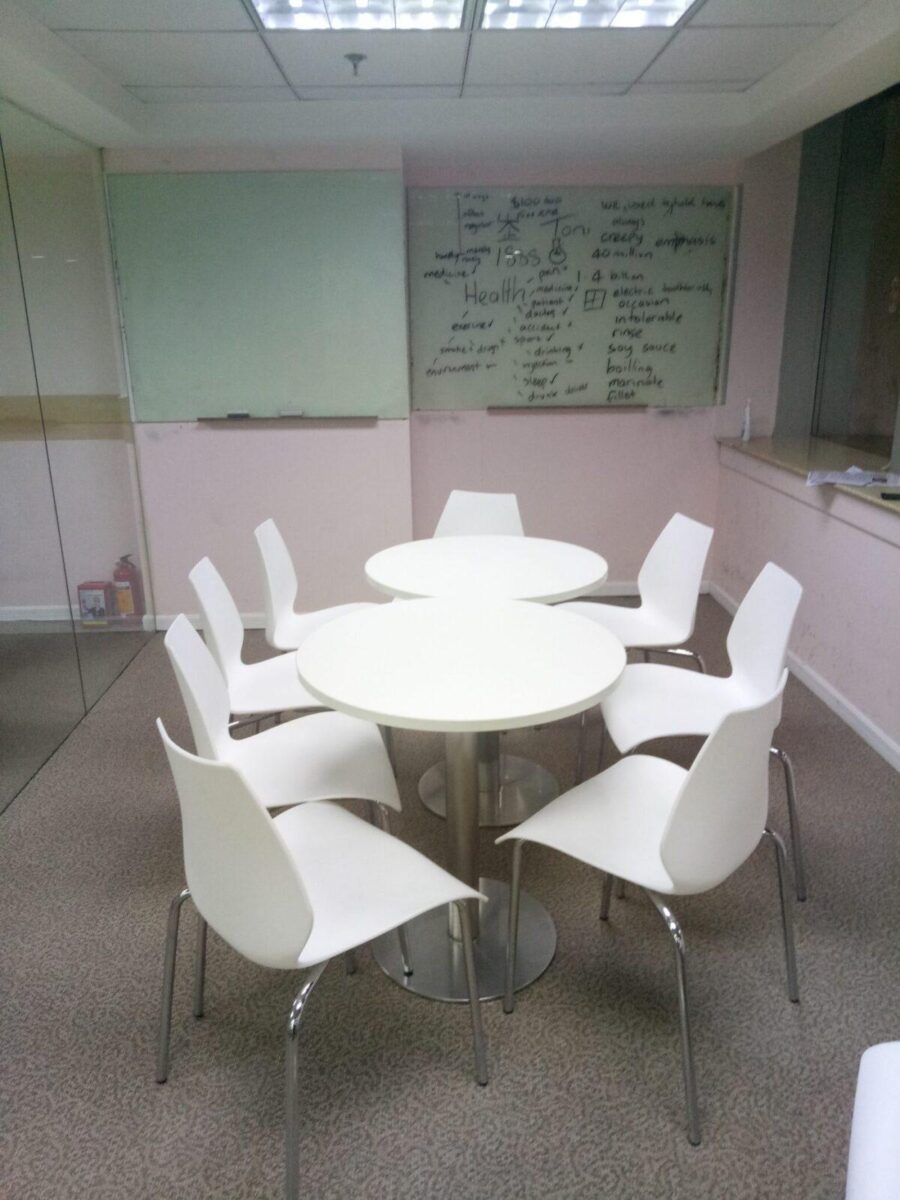